Phoenix always stands out as the most legendary being among many mythical creatures in folks, myths, movies, and comics. The majesty and magnificence of Phoenix is the reason why many people favor its tattoo editions.

What Is Phoenix Tattoo Meaning?

Besides possessing many magical and mythical features itself, the Phoenix tattoo also delivers distinctive meanings. Let’s find out these meaningful demonstrations to grasp your art’s meaning better. 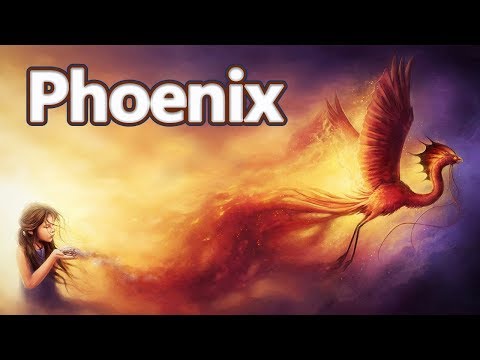 The General Meaning Of Phoenix Tattoo

Why do we set the section “general meaning”? Though Phoenix’s message differs depending on each culture and country, its overall meaning won’t exceed the ranges below. Most of the time, the Phoenix tattoo will symbolize:

#1 The Beginning Of A New Life

One of the magical powers of a Phoenix is to generate and create a new life or rebirth. Anyone who has gone through drastic changes in his life, either awful or wonderful, that he turns into a new person can consider getting a Phoenix tattoo to mark the special milestone of his life.

Growth, of course, will come with an optimistic meaning. It can be the development of your experience, your manner, or the remarkable achievements you have attained after tough periods.

#3 The Victory Against Challenges

Phoenix, with its majesty and mightiness, is always one of the most powerful mythical creatures. Therefore, in battles with other legendary animals, Phoenix often wins. From this conception, the Phoenix tattoo can be an appropriate symbol for people who want to indicate their overcoming challenges in life.

A man with a Phoenix tattoo on his back

Strength and power are features that make Phoenix stand out among many legendary creatures. If you want to find a tattoo to show off your power, both physical and metaphoric terms, you can opt for a Phoenix tattoo. 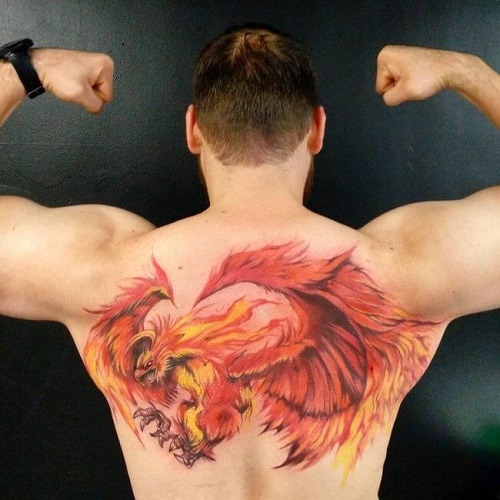 Phoenix tattoo to show off your power

It’s such a shortcoming not to mention the Sun when talking about Phoenix. They are inseparable in any conversation. Similar to its companion, the Sun represents thriving, limitless energy and power. Getting a Phoenix tattoo also brings what the Sun presents.

The Meaning Of Phoenix Tattoo In Countries And Civilisations

Countries and civilizations always have a background of thousand-year culture with their own Phoenix tattoo meaning.

In Japan, Phoenix tattoos often come with extremely colorful designs and clouds or flowers around. Many people have this tattoo in the hope of luck. As they believe, the Phoenix can use its legendary power to help them achieve fortune in life or avoid getting bad luck. 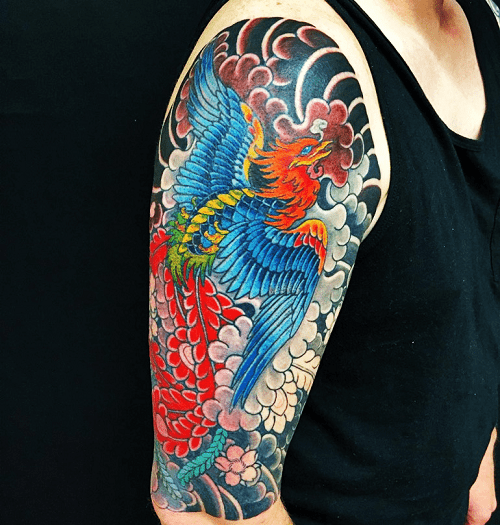 Not only represents luck, but the Japanese Phoenix tattoo symbolizes the beginning of a new life. When a person reaches a new chapter of his lifetime, he may decide to stress the memorable occasion with a new tattoo, where a Phoenix is an optimal choice.

The “beginning a new life” meaning in the Japanese Phoenix tattoo resembles the demand for luck or for better things to come.

After times of failure, sorrow, and disappointment, many Japanese turn to having a Phoenix tattoo as a sign to wish that the present miserable life will disappear and happiness will come into their life. 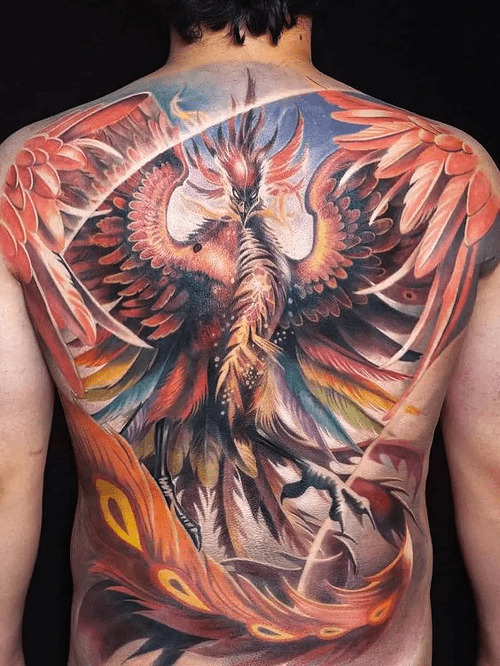 The “beginning a new life” meaning in the Japanese Phoenix tattoo

Chinese people often think of Phoenix under the name Fenghuang. Phoenix is the second most mighty and majestic mythical being in their culture, which is only inferior to Dragon.

The explanation for this fact is that while Dragon symbolizes the emperor, Phoenix is the symbol of the empress. Hence, the Phoenix tattoo in Chinese culture will bring the sense of royalty, or more specifically, the royal power.

Especially the famous Yin and Yang, as well as balance, is also one of the most familiar meanings of Phoenix in China. Stemming from the connection of two contrast elements, it states that an actual life can’t be prone to being too terrible or too promising.

By that, we mean a Phoenix tattoo in China will remind us not to let failure knock us down or success blind our minds as life is always well-balanced. 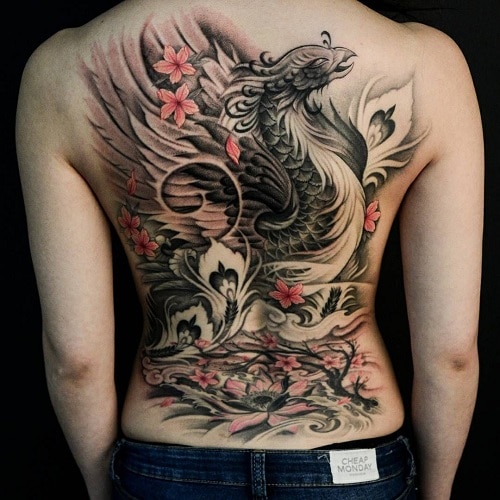 Phoenix is also a meaningful tattoo for Christians. According to the Chrisitans’ belief, Jesus Christ is reborn after three days from his death. It has something to do with the myth about Phoenix that its resurrection from the flame begins after three days since its death.

For this reason, getting a Phoenix tattoo is a way for Christians to show their desire for resurrection.

Many legendary creatures in Jewish legend can’t resist eating the forbidden fruit, but for the Phoenix. To do so, the Phoenix has to immerse itself in flame as a way of sacrifice for the virtuous belief. After three days, the Phoenix is reborn from the ashes. 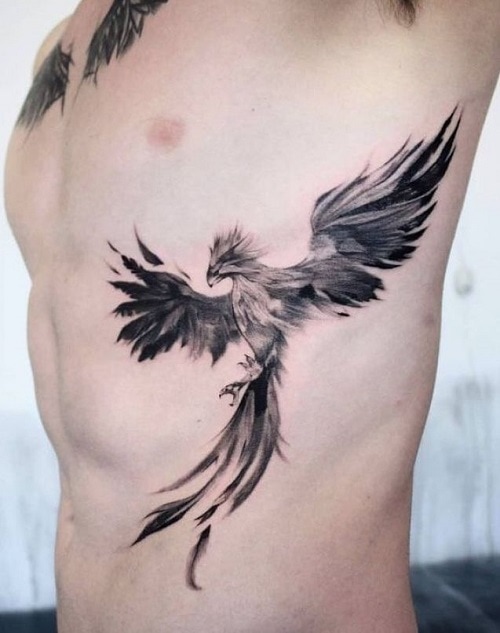 People who worship the Sun God Ra can choose the Phoenix tattoo because this legendary creature represents Ra, the most powerful god in the Ancient Egyptians.

In the Ancient Romans, they carved the image of Phoenix on their coins to crave for the Roman Empire’s eternal prosperity. Because of this historical fact, the Phoenix tattoo also expresses its owner’s demand for continuous and stable wealth in life.

The Meaning Of Phoenix Tattoo In Separate Designs

From time to time, tattoo enthusiasts have developed many creative and artistic designs for the Phoenix tattoo. Coming with the different designs are separate meanings.

The combination of the two most powerful legendary creatures in Chinese culture must mean something remarkable. In this case, the Phoenix and Dragon tattoo is all about a romantic relationship.

As mentioned above, the Phoenix in China symbolizes Yin, while the Dragon represents Yang. These are the indispensable elements to keep life balanced, and they can’t exist without the other.

Therefore, putting a Phoenix and Dragon tattoo on your skin means that you are looking for the true love of your life if you are still single. Or else, the tattoo expresses your strive for a committed and trustworthy relationship with your beloved one if you already have one.

A blue Phoenix is not a variation of the Phoenix color, but it is the flames embracing this mythical being. Normally, due to its common temperature, the flame would be red or orange. Only when it bursts more extensively, the color will turn blue.

Besides the artistic and creative value, a blue Phoenix tattoo brings the meaning of the desire to break your limit and become a better version of yourself. 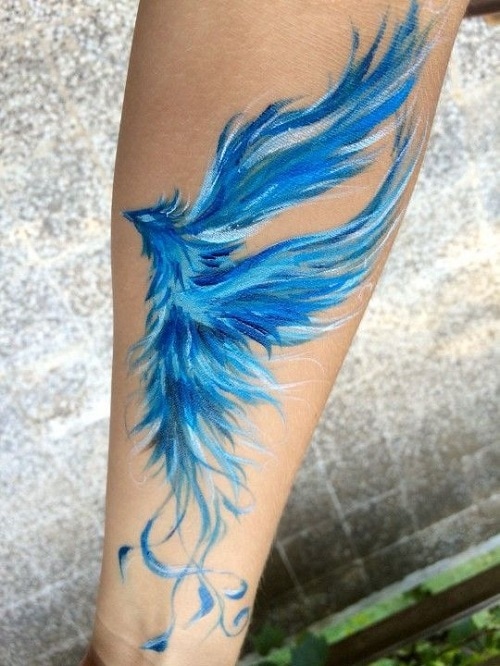 Tribal Phoenix comes with the image of a Phoenix, which is spreading her wings and flying to the sky. Beneath her are ashes of the flame that gave birth to her. This image demonstrates the extraordinary vigor of the Phoenix after sacrificing herself into the burning flame. The owner wants to tell everybody about his hope for retaining the energy that he has lost from this tattoo. 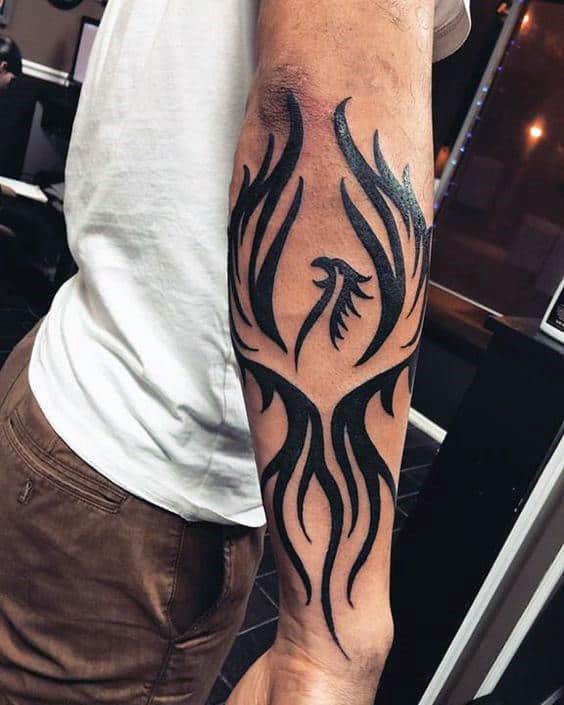 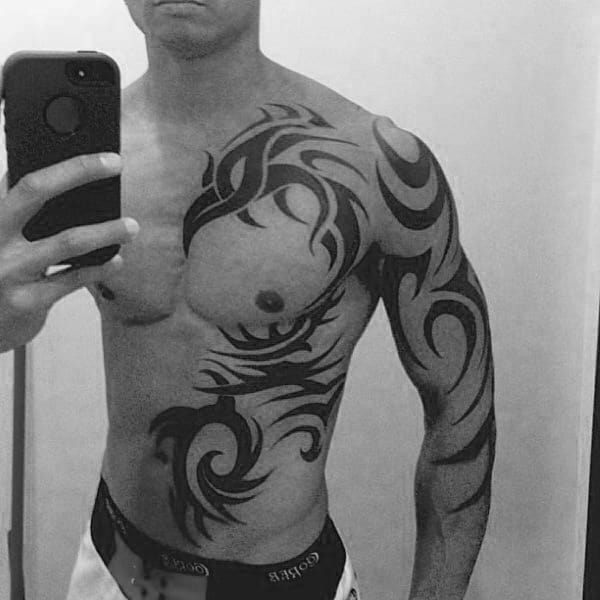 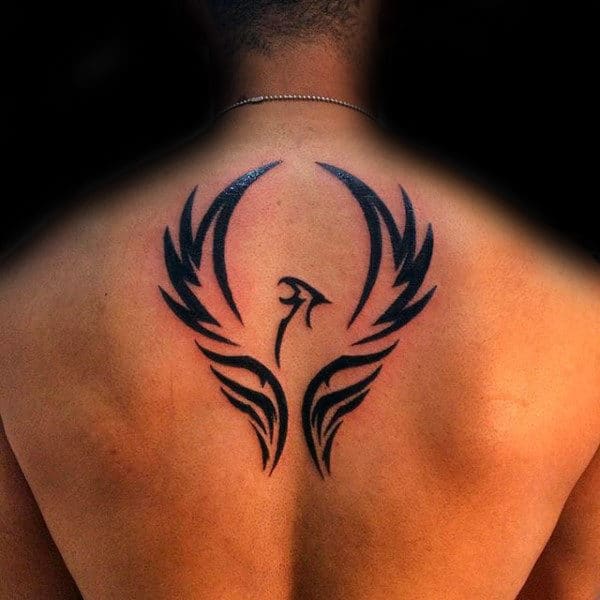 Unlike the legendary Phoenix, Wolf is a real animal. What does the combination of a moral animal with a mythical one mean?

When we refer to Wolves, we will think of a fearless, lonely species, determined for its purposes and among the top predators. These characteristics, along with the power and majesty, will create an outstanding Phoenix with almost no disadvantage.

The tattoo enthusiasts choose this Phoenix tattoo variation to declare the unstoppable determination for the best results in whatever job they do. Moreover, the Wolf and Phoenix tattoo demonstrates that the owner is brave and willing to face any challenge in his life. 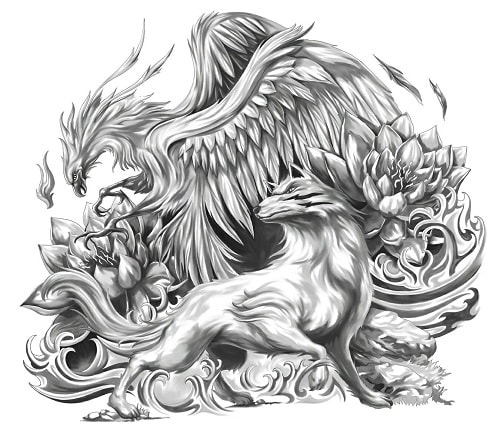 Instead of tattooing the whole Phoenix on the body, some people only opt for the image of her wings. Many females consider this as an impressive Phoenix tattoo idea. 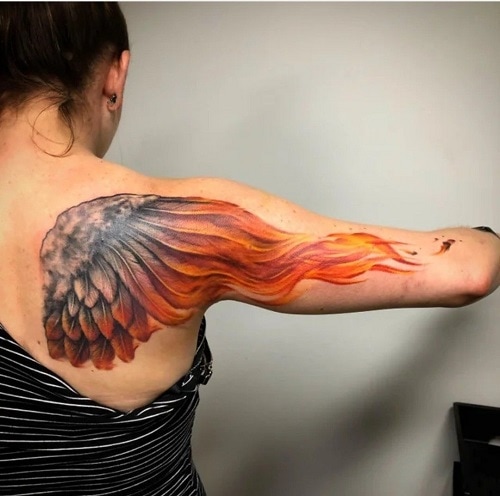 Having the Phoenix wings inked on will make the woman look more charming and energetic. A woman always has her secret desire and wants to express it without saying a word. In this case, the Phoenix wing tattoo is a favorable indication.

Phoenix wings come regarding the yearn for prosperity and freedom. The prosperity aspect here accounts for material rich and mental wealth, including having good friends, living purposefully, breaking her limits, and so on.

On the other hand, the freedom aspect helps show the world who she truly is or that she has an independent life.

Even just a Phoenix feather can be a masterpiece on your skin with its meaningful demonstration. It’s the symbol of eternal existence and the ability to give other creatures life. You may have noticed this meaning in the Harry Potter series. In this fictional series, the Phoenix feather is a sought-after and indispensable element in making a magical wand. 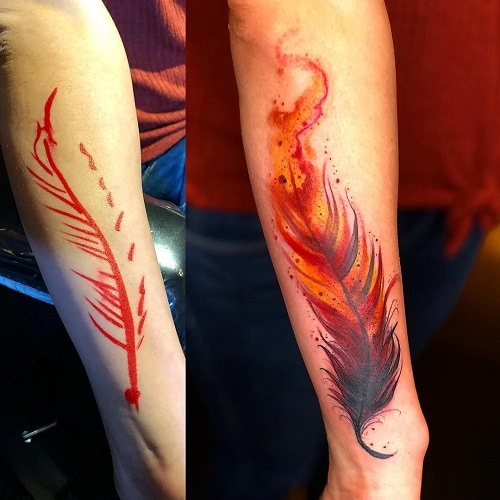 Does Phoenix Have Gender?

Myth researchers regard Phoenix as parthenogenesis. This uncommon term is related to asexual reproduction. Or we can say the Phoenix can lay eggs without mating with other male beings.

The newborn Phoenix will inherit this special feature from her mother Phoenix. Furthermore, parthenogenesis is the type of reproduction that gives birth to only female animals. Therefore, a Phoenix is always female. Each newborn would be an exact duplicate of the previous version.

Is Phoenix Tattoo Suitable For Men?

With all the meanings above, Phoenix is the appropriate tattoo for any gender. Despite Phoenix being female, it doesn’t mean that this legendary being will appear in an elegant and charming shape.

Depending on the capability of the tattooist, you can have a Phoenix tattoo inked on your body to show majesty, fierceness, power, and eternal vitality.

Which Part Should You Put The Phoenix Tattoo On?

For each gender, the body part that you should put the Phoenix tattoo on will vary. Each part would bring different artistic effects on you. Your body, your choice, you can decide to put the tattoo anywhere you want. Below are our suggestions of common tattooing parts for both genders.

Phoenix is the endless inspiration for tattooists to come up with wonderful art pieces on human skin. It is the symbol of the optimistic and inclined to the decent values in its owners’ life.

As you can see, the Phoenix tattoo meaning is diverse based on the rituals and conceptions of each nation and culture. Before putting a Phoenix tattoo on your body, you should clarify which meaning you want to express through the tattoo.

Let us know if you liked the post. That’s the only way we can improve.
Tweet Pin It WhatsApp

Born in the 60’s , vintage hoarder ,rock’n’rol l#badinfluencer. I am a cheerful, extravagant who enjoy life and travel. The proud owner of tattoo parlor Bang Bang in Sintra, Portugal.

You can find out more about which cookies we are using or switch them off in settings.

This website uses cookies so that we can provide you with the best user experience possible. Cookie information is stored in your browser and performs functions such as recognising you when you return to our website and helping our team to understand which sections of the website you find most interesting and useful.

Strictly Necessary Cookie should be enabled at all times so that we can save your preferences for cookie settings.

If you disable this cookie, we will not be able to save your preferences. This means that every time you visit this website you will need to enable or disable cookies again.